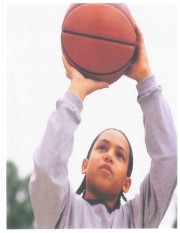 There are many truths to shooting that unfortunately most coaches today are not aware of or are currently teaching incorrectly.  Most of the instruction is somethng that is passed down from generation to genration of players.  These coaches would be surprised that many of the "teaching" point they were taught can be traced all the way back to the "Set Shot" from the 50's.  Obviously, basketball like everything else has changed over time and with the extensive use of Video we can analyze the traits of great shooters.  When doing this it quickly becomes apparent that what we were taught was not really the Truth of what great shooters do.  About 5 years ago, when doing research I stumbled across Pro Shot Shooting system developed by Paul Hoover.  At first like many coaches I was skeptical of his "10 Lies of Shooting" however, the more I read and the more watched, it become clear much of what he teaches is the Truth.  I have incorporated many of his Truths into my own, below are a few of the Truths.

For years Coaches have instructed players to be “squared” to the basket with feet pointing forward.  The reality is that this aligns the Shooting arm to the outside of the rim, which makes no sense.  Great Shooters turn their feet allowing their shooting arm/shoulder and hip to align to the center of the rim in a comfortable and relaxed manner.  Does it make more sense to align to the center of the rim or the outside of the rim?  Also turning has a great impact on keeping the Shooting elbow in and aligned during the shooting process. Don’t believe me watch this video?  The Turn

The importance of shooting in Rhythm has always been a “catch phrase” for shooting coaches, but what exactly does that mean?  It means your body working together in a smooth, singular process as you shoot the basketball.  One of the important aspects of “Rhythm” shooting is learning how to shoot the same way every time – off the catch or off the dribble.  Many coaches for years have taught a one-two step, the problem with the “one-two” approach is it “anchors” the first foot and creates a pivot foot plus it is slower.  At Shooting School I teach the “Hop” which allows shooters to quickly get in a good rhythmic motion, whether off the dribble or in a catch and shoot situation.   See this Video for more information.

Truth 3 - Get Rid of the Waste in Your Shot

Wasted Motion – One of the biggest problems, especially with young shooters, is wasted motion during the shooting process.  Wasted motion is motion in the shot that is not necessary and is usually the result of bad habits formed at the youngest age.  The more motion in the shot, the more chance for error and the result is increased inconsistency while shooting.  Through extensive video analysis at Shooting School I am able to identify and eliminate wasted motion.  I ask all players a simple question “When you are at home what do you waste?”  The answer is obvious, you get rid of it, like the trash it is.

Pictures and Videos will be uploaded shortly